Is the C1-E Concept Vehicle the Future of Urban Transport? BMW Seem to Think So

German manufacturer, BMW, undertook a study a few years ago, into the future of urban transport and predicted what it thought a future city vehicle would look like. It was named the C1-E, not all that inspiring, and was developed in collaboration with the European safety project eSUM (European Safer Urban Motorcycling).

What does the C1-E concept vehicle have to offer? 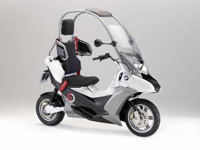 BMW revealed in 2009, what it thought the future of urban two-wheeled transport would look like. Working in collaboration with eSUM, it created the C1-E concept vehicle powered by an electric motor. The claim is that it will offer a high level of both active and passive safety. The riders protection is provided by a safety cell which includes a roll-over bar and makes use of a seat belt. Because of its design, it was also felt that it would be the only single-track motorized vehicle that would not require the mandatory wearing of a helmet.

The inspiration for its design comes from a scooter and it has a low visual center of gravity that includes the fitting of a windscreen. It would have a side stand and luggage space behind the rider. These features, it was felt, would make it a vehicle for every day use and protect riders from wind and weather.

An electric motor would be used to power the vehicle, based on a lithium-ion battery. But there would be the option of a low-emissions internal combustion engine.

Unfortunately, this concept car never went any further. But that doesn't mean that manufacturers have put such research on the back boiler. On the contrary, in fact. New studies, research and projects are regularly being undertaken. The latest to be released by BMW's 'innovations; group is for its revolutionary electric two-wheeled vehicles to be ridden off city streets and be given their own elevated roadway system. The idea comes from BMW Group Technology Office China in Shanghai, along with Tongii University. The idea is to address traffic congestion, air pollution and tackle many other challenges large cities are likely to face going in to the future.